Supercharge your solution design with a little genchi genbutsu! 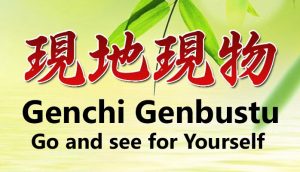 Have you ever seen a project implementation go sideways because the solution didn’t solve the problem it was intended to? Have you ever encountered a product that didn’t properly address the use for which it was designed? It was probably due to neglecting genchi genbutsu, a Japanese term which roughly translates into “go and see for yourself”. For more information see the wiki entry here: https://en.wikipedia.org/wiki/Genchi_Genbutsu

When we gather solution requirements through current state, future state and gap analysis we need to ensure that going and seeing for ourselves is incorporated as a key activity. How else will we be able to confirm that:

1) the problems/drivers articulated are factually correct?
2) the solutions designed to solve the problems will work?

Consider the following scenario:
A project team books a series of meetings with our subject matter experts to gather requirements by documenting the current state, followed by mapping out the future state and finally arrive at the solution design that will address the problem that the project is responsible to address.

One of the project solutions incorporates a new multi-function printer that has four extra large trays added to it with different types of media to support the new workflow. Furthermore, this new printer will replace three separate printers in the workspace that were dedicated to single use roles. This printer will be located where one of the existing printers is because the staff member most responsible for this new workflow is there.

There is a delay with the new printer shipping and the project team is unable to deploy it until the day of go-live. When they show up to install the printer they discover that the existing printer is situated on a counter three feet high. The new multi-function printer is four feet high. So the new printer is seven feet high and the staff member is unable to read the status LED on the top of the printer without a step ladder.

The team had never actually gone and seen what the space looked like. They assumed that the SMEs had given them all they needed to know during the requirements gathering sessions. The swimlane diagrams/process maps etc. all identified the printer but not the physical space it would go into.

Now the above scenario is s simplistic example but I hope that project teams can see how genchi genbutsu can really make a difference in the completeness and accuracy of the solution design. The earlier you catch something like this in the project, the less it is going to cost to course correct.

Some people may argue that it is too expensive to always practice genchi genbutsu but I would suggest that the cost of not doing it is even greater. After all, if you don’t have time to do it right the first time…you must have time for all the re-work!

Attributed to Peter Drucker (Wikipedia) but popularized by Mark Fields (Wikipedia) of Ford Motor Company in 2006.

What it means to me in “ProjectLand” is that methodology must be created and continually tweaked in lockstep with organizational culture because failure to do so will almost certainly result in the failure of the methodology specifically and call into question the usefulness of strategy/change/project/process improvement management generally.

Before engaging in any change process, leaders would do well to review the Four Realities of Change as identified by Timothy Clark in his book EPIC Change (page 111):

What this means is that as a change leader you should not pretend that these realities don’t exist and when communicated will go much further in producing trust in those who you would have join you in the organizational change.

Don’t attribute (good or bad) to people that which should be attributed to the system.

Common-cause variation is characterised by:

Special-cause variation is characterised by:

Hey Craig! How can we understand what kind of variation we are dealing with?

So why do we care Craig?

We should care because more often than not the wrong type of variation is suspected and then the wrong response is applied (tampering), which is not only more expensive but it negatively impacts the staff working within the system.

For example, what was the reaction to the 9/11 attacks in the United States? They spent billions of dollars tampering with the system (a common cause response) that ultimately has not increased safety because it was not the source of the variation in the first place. The nature of special cause variation is that it never happens the same way twice (which is why the terrorists opted for shoe explosives instead of box cutters the next time around).

For more information I highly recommend this post at the Gemba Walkabout: http://gembawalkabout.tumblr.com/post/34257410679/understand-variation-the-forgotten-principle.

The ability to see the consequences of our actions by evaluating information, knowledge and understanding

DATA (know what, where, when)

Symbols that represent, characteristics of objects or events (individual facts)